Hanzo the Razor: The Sword of Justice (1972) Kenji Misumi 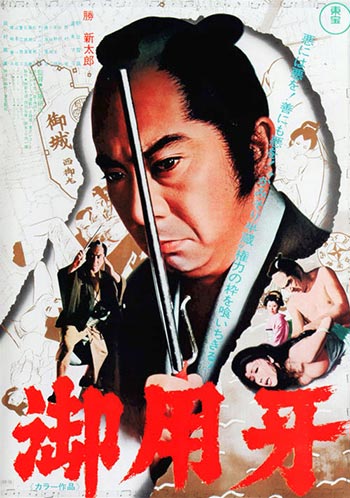 Hanzo is an incorruptible and unorthodox officer in Edo, as famous for his self-discipline and his love shaft as his sword. Against the backdrop of his magistrate’s occasional rounding up of vagrants, Hanzo learns that an infamous killer is no longer on his island prison: did he escape or was he never there? Hanzo’s investigation leads him to the magistrate’s mistress, the killer’s former lover. Hanzo pursues political questions that suggest complicity at the highest levels. Using sexual assault, he interrogates the mistress and later the favorite of Edo’s most powerful woman. Can he get to the bottom of what’s going on before powerful forces get him fired or killed?

The film is, alike most good exploitation films, the absolute opposite of political correctness. The incorruptible Hanzo’s interrogation techniques include raping female suspects – who immediately give themselves up to him voluntarily once they have tasted his incomparable sexual powers. Hanzo is blessed with a giant penis, that he strengthens in bizarre rituals. He regularly submits himself to torture in order to become tougher and to improve his own interrogation techniques. He despises the swells and sees his profession in the service for the common people…

The film features a lot of sleaze, as well as some pretty gory scenes of bloody violence. All this comes along with a super-cool jazzy/funky score and a great sense of macabre humor. Hanzo has sometimes been compared to the super-cool heroes of contemporary blaxploitation flicks – but he is better than that. Hanzo ‘The Razor’ Itami is the epitome of coolness, and easily one of the coolest (anti-)hero characters in motion picture history. Period. And nobody could have played this unique character even nearly as brilliantly as the great Shintarô Katsu, one of the most unforgettable stars of Japanese cinema. Yukiji Asaoka and Mari Atsumi are the yummy female cast that come to enjoy Hanzo’s ‘interrogation techniques’. “Hanzo” is brilliant Cult cinema at its finest. Brilliant, Unique and absolutely Essential!