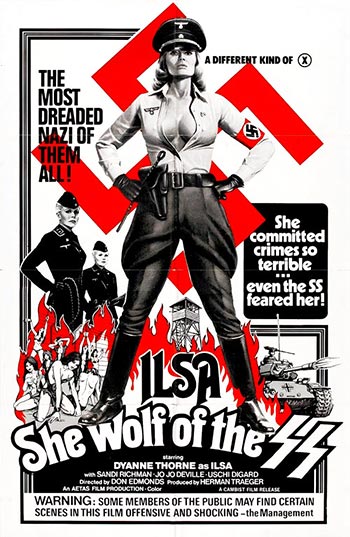 Ilsa is an evil Nazi warden at a death camp that conducts “medical experiments”. Ilsa’s goal is to prove that woman can withstand more pain and suffering than men and therefore should be allowed to fight on the front lines.

Ilsa, She Wolf of the SS certainly deserves its reputation as a nasty film. Although it is thoroughly cheesy, poorly acted, routinely directed, and extremely camp at times, the film still packs a punch due to its ability to offend and disgust at every turn; the depiction of Nazi atrocities in the name of entertainment is hard to defend (so I’m not even going to try) and this movie pulls no punches with its well executed graphic violence and horrific torture scenes.

Ilsa, played with gusto by chesty blonde Dianne Thorne, is the Kommandant at a concentration camp where she oversees medical research performed on the female prisoners. Meanwhile, she uses the males to try and satisfy her sexual needs (and when they fail, she has them castrated!). It is up to German/American stud Wolfe to lead the prisoners in a revolt against the guards whilst simultaneously gaining Ilsa’s trust by rogering her senseless at every opportunity.

This notorious sleaze classic packs so much depravity into its 96 minutes running time (uncut), that lovers of exploitation will have a field day. From the opening scene in which Ilsa’s sex slave is dragged back to the camp to be emasculated, to the ending in which the prisoners exact bloody retribution, sex and violence pervades every frame. The effective make-up FX by Joe Blasco are repugnant enough for hardened gore-hounds and fans of the female form will be delighted by the copious amounts of nudity (nearly every woman gets naked at some point in the film!). And lets not forget the scene in which Ilsa pees on the Nazi general…

Thirty years after it was made, Ilsa still has the ability to shock—the mark of a true exploitation classic!