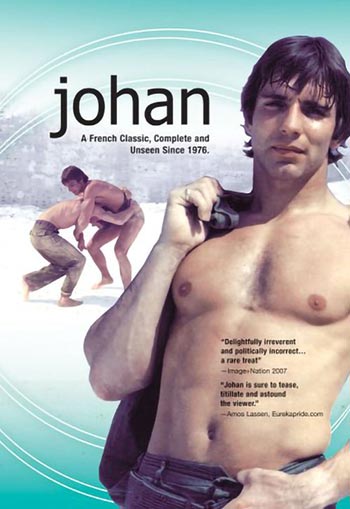 While Philipe waits for Johan to come out of jail he starts recreating several moments of their relationship with the help of several friends during the summer of 1975.

Johan was actually screened uncut at the 1976 Cannes Film Festival. The French censors, however, slapped an X rating on the film and the naughtier bits (like the fisting scene) were edited for general release. The negative was destroyed and the film itself vanished from view for years. It was rarely screened, and was eventually forgotten; there is no mention of Johan in most queer film texts. On the documentary that comes with the disc, director Vallois tells how a French film archive discovered a small reel labeled “Johan” that was forgotten in a projection booth 30 years before. It contained all the footage, long thought to be lost, that was cut to avoid the X rating. All the explicit imagery that the audience saw at Cannes has been restored and a new generation can see the film as it was originally screened.