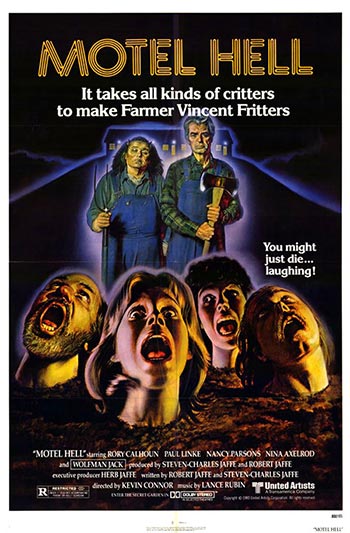 Farmer Vincent kidnaps unsuspecting travellers and is burying them in his garden. Unfortunately for his victims, they are not dead. He feeds his victims to prepare them for his roadside stand. His motto is: It takes all kinds of critters…to make Farmer Vincents fritters. The movie is gory, but is also a parody of slasher movies like Last House on the Left.

Kevin Connor’s “Motel Hell” is a tremendously fun and engaging horror comedy, impossible not to love. Right from the opening sequences, the film sells itself as a light-headed and blackly humorous gem that spoofs some of the genre’s biggest classics without ever disrespecting them. The references towards milestones like “Psycho” and “The Texas Chainsaw Massacre” are obvious but, unlike many haters of “Motel Hell” claim, this is certainly not a rip off!

This simply is campy entertainment, very tongue-in-cheek, fast-paced and with a couple of adorably gross make-up effects. Connor’s directing is solid and he makes excellent use of the typically eerie “redneck” stereotypes, such as the clumsy sheriff and the barbaric farmers. The chainsaw-battle sequence during the finale is a real hoot. Highly recommended for horror fans who don’t take themselves too seriously.