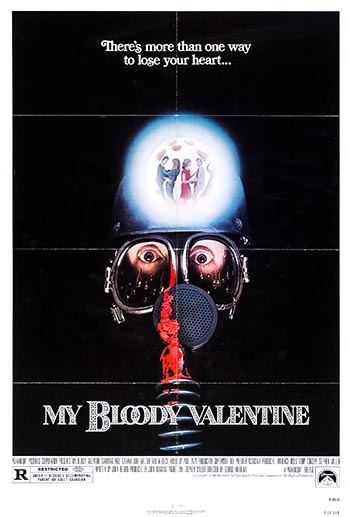 There’s a big valentine-party planned in the little coal mining town of Valentine Bluffs, Nova Scotia. It is the first Valentine’s Day party in 20 years, because then there was an accident in the mine, and the accident happened because the men responsible for the security was at the party. The sole surviving miner, named Harry Warden, later killed them, and told the town NEVER to arrange a Valentine’s Day party again. The party begins, and so does the killing…

In the wake of Halloween and Friday the 13th, many similar films were released, most of which had little or no distinguishing features. One of the most effective and atmospheric was My Bloody Valentine.

Shot in Canada and very infamous for it’s brutal battle with the MPAA, My Bloody Valentine is a surprising success, and a wonderful addition to the slasher genre. The acting is good, which comes as quite a shock for any slasher lover. The deaths are very effective and intense, especially the laundry room sequence. The image of the killer, dressed in a full miner’s garb, smashing the lights along an already dark mine shaft, while a group of victims try to escape is terrifying.

It’s lush photography, good acting, frightening set pieces and killer, and brutal deaths make this is one of the most impressive slashers of the 80’s.