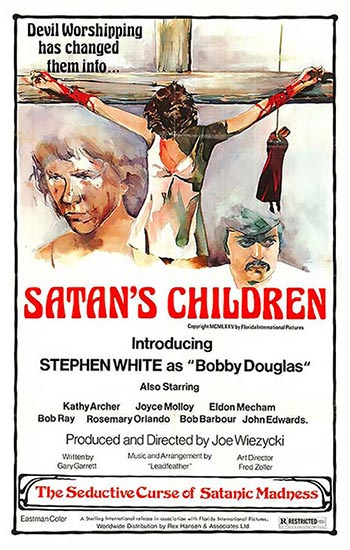 Runaway teen Bobby is given shelter by a friendly cult of Satanists, but his presence–and questionable sexuality–leads to conflicts within Satan’s Children, especially after a lesbian member is damned to Hell. But Bobby proves to be one sick puppy, which he demonstrates in ways that would even make the devil smile. So hilarious, homophobic, and just plain insane, you’d think Lucifer himself was personally involved!

“Satan’s Children” is a sensationally sick, twisted and depraved doozy of a low-budget 70’s drive-in horror flick. Writer/director Joe Wiezycki relates the deranged story in a tight, snappy, straightforward manner that ensures that there’s never any dreary lulls to speak of. The stark, no-frills style of the picture, best epitomized by John “Mak” Makinen’s plain, grainy photography and Ray Fletcher’s odd, spare, droning score, adds an immediacy to the warped proceedings that’s both skin-crawlingly creepy and strangely compelling in comparable measure. The final image in this film is very scary and disturbing, concluding things on a shockingly nihilistic note that the Devil himself would approve of.