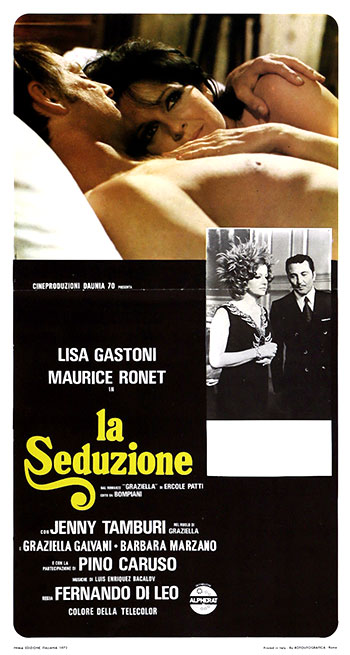 After returning to Catania after a long period of time, Giuseppe reunites with his old lover, Caterina. Her 15 year-old daughter, Graziella begins to seduce her mother’s lover and he soon breaks down and begins an affair with her. As time passes Caterina begins having sneaking suspicions about Giuseppe’s & Graziella’s relationship.

The great Fernando di Leo strikes again with another superb film, this one being an erotic drama, although di Leo always did well in any genre in which he worked. The late, great Maurice Ronet stars as a man who returns to his hometown in Sicily after fifteen years of success working as a journalist in Paris, and promptly rekindles his love affair with his former flame, who is now a widow with a fifteen-year-old daughter (Jenny Tamburi) in tow. It is not long before Ronet gives in to the frequently flaunted charms of Tamburi, and of course it’s all downhill from here for everyone.

“Seduction” is beautifully photographed, boasts an exquisite, and at times highly sensual Luis Enriquez Bacalov score, and is extremely well-acted by the three main cast members. Ronet is as terrific as always and manages to arouse much empathy for a character who really deserves none. If this film had seen the light of day in the United States, Lisa Gastoni, as Ronet’s old flame and mother of Tamburi, could have walked away with an Academy Award nomination for her searing, emotion-laden performance. Finally, Jenny Tamburi is very well cast as the Gloria Guida-like sex kitten whose Lolita-like charms sizzle and scorch the screen — she almost turns her adolescent pouting routine into an art form.