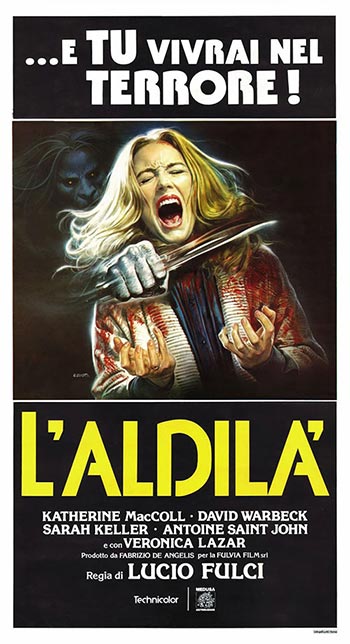 The cellar of an old hotel is built on top of the door to the beyond. Bloody zombies roam there. A young woman who is heir of the hotel wants to restaurate it. She is confronted with strange events. A painter has a lethal fall, the plumber vanishes and her friend breaks his neck. When she escapes to the hospital of a friendly doctor she doesn’t know what a nightmare is waiting there…

Forming a loose trilogy with Fulci’s “The Gates of Hell” (1980) and “House by the Cemetery”(1981), this gruesome bloodbath is one of the best horror movies ever made. The atmosphere is so thick you could cut it with a chainsaw, the music by Fabio Frizzi is excellent, the set pieces are great,and the gore effects by Gianetto de Rossi and Germano Natali are really effective. The gore is extreme for example a poor plumber has his eyeball poked out by a zombie, an architect has his face eaten by hungry tarantulas who chew out his tongue, a blind Emily has her throat ripped out by her guide dog (this scene reminds a similar sequence in Dario Argento’s “Suspiria”). Anyway if you haven’t seen this cult masterpiece don’t call yourself a horror buff.