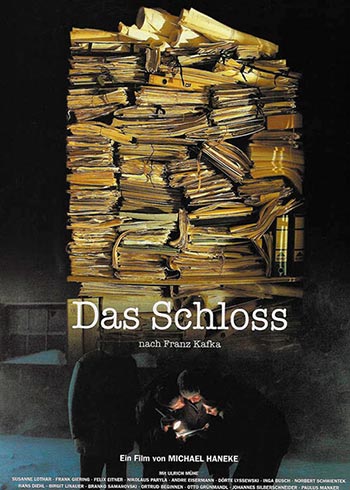 Michael Haneke’s film of Franz Kafka’s The Castle pairs one of the most influential voices in 20th century literature with one of the most visionary filmmakers of the new millennium.

A Film as complex, vivid, and “intriguing”(New York Times) as Orson Welles’ The Trial, The Castle is both an ingenious, perversely faithful interpretation of the master of alienation’s novel, and a worthy companion to The Piano Teacher, Cache and other films from the darkest leading light of contemporary cinema.

A land surveyor identified simply as K is summoned to a remote mountain village by the local government, known as (and housed in) “the castle”. Unable to convince underlings of the legitimacy of his position, he tries to take his case to castle officials. But the more K struggles to gain entrance, the most obstructive the village’s provincial bureaucracy becomes. As the absurdity of K’s circumstances and the depth and intricacy of the castle’s hold on the villagers grows, Haneke masterfully evokes Kafka’s vision of a dystopian society hobbled by paperwork and bled dry by conformism and convolution.

Using an expert cast headed by Haneke regulars Ulrich Muhe (The Lives Of Others, Funny Games) and Susanne Lothar (The Piano Teacher), and beautifully austere, Rembrandt like visuals, Haneke transforms Kafka’s unfinished novel into a potent, enigmatic, and complete film experience that is truly Kafkaesque.