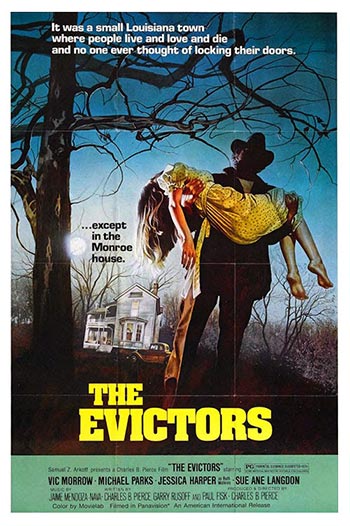 A young couple just being married rents a house in a village in Louisiana. But they are not welcome because the inhabitants of the village look at them with distrust – in the house they rented were happening strange things in the past…

Director Charles B. Pierce may be best known for his docu-chillers The Legend of Boggy Creek (1972) and The Town That Dreaded Sundown (1976), but The Evictors may just be the over-looked gem of his film career. Like his previous films The Evictors has a splendidly gritty, rural atmosphere that gives it a raw believability. This becomes all the more effective when the story builds to some strong tension as our heroine is stalked by a phantom prowler. There are also a number of flashbacks, shot in stylish black and white, that have a chilling creepiness.

The story is fairly well-written, as the plot takes a few unexpected and surprising turns. Its only real flaw is a final revelation that’s a bit improbable. Pierce does well at creating a 40’s era atmosphere, much like that of The Town That Dreaded Sundown. The camera work is nicely done and the music score solidly spooky. The biggest highlight here may come from star Jessica Harper’s understated performance. Harper (best known as the heroine of Suspiria and Phantom of the Paradise) makes a truly convincing role here.

Over all, The Evictors is definitely a film worth checking out for horror fans, particularly those who are fans of Pierce or Harper. This is an underrated effort in need of a new audience.