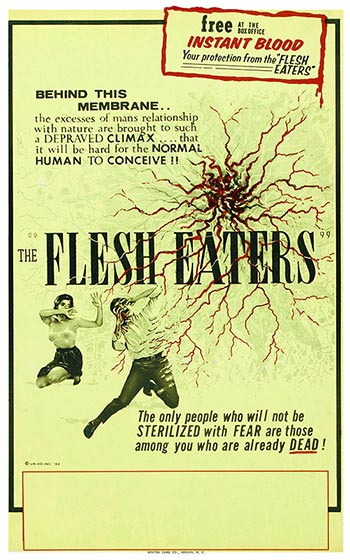 An alcoholic actress, her personal assistant, and their pilot are downed on a secluded isle by bad weather, where a renegade Nazi scientist is using ocean life to develop a solvent for human flesh. The tiny flesh-eating sea critters that result certainly give our heroes a run for their money – and lives.

This film is an updated for the 1960s version of the traditional late 30s-40s mad scientist tale but one with the surprising addition of gore, used very effectively for the time. Martin Kosleck here provides the mad scientist, a Nazi stereotype not uncommon to earlier eras. The Flesh Eaters themselves make for a memorable menace and the early scene with the two swimmers is an excellent bit of film making. The gigantic ones and their showdown with the hero at the end requires much suspension of disbelief but the monsters are also quite nasty-looking which makes for fun viewing if you’re into seeing giant monsters.