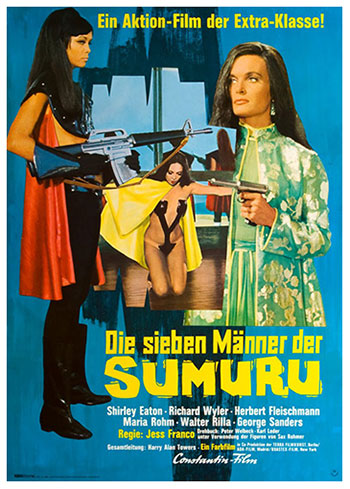 Jeff Sutton arrives in Rio de Janeiro with a suitcase with 10 million dollars, and the powerful mobster Sir Masius sends his henchman Carl with his gangsters to follow Jeff and get the money. Jeff has one affair with the manicure Leslye and succeeds to escape from Sir Masius’ mobsters. Meanwhile, Sumuru, the leader of the women of the City of Femina that wants to defeat the men and take over the world, captures Jeff and brings him to Femina expecting to get the money. Sumuru has several prisoners locked in glass cages, including Ulla Rossini, who knows Jeff Sutton. Jeff discloses to Ulla that his arrival is part of a plan to save her from Sumuru. Jeff Sutton becomes a pawn in the middle of the war between Masius and Sumuru.

The Girl From Rio AKA Future Women is precisely the sort of loopy nonsense that we cult movie fans find absolutely fascinating: it has an outlandish espionage plot, born of the feminist movement yet still managing to exploit women at every turn; it stars familiar performers Shirley Eaton (Goldfinger) and George Sanders (All About Eve) camping it up like there’s no tomorrow; there’s crazy kitsch 60s fashion a go-go; and director Jess Franco ensures that the film is imbued with a strangeness and technical ineptitude of the kind guaranteed to keep his loyal followers happy, despite the whole affair being far more light-hearted than many of his other movies.