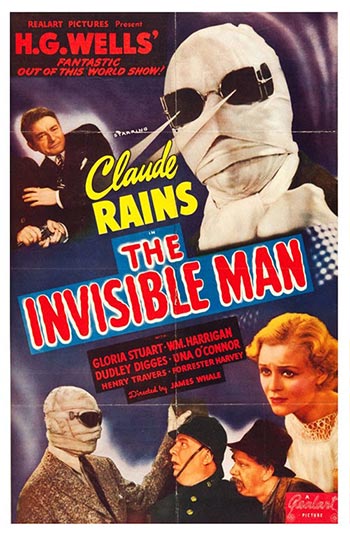 A scientist turns himself invisible. However, the formula slowly drives him insane, causing him to terrorize the countryside as an invisible killer.

The direction is the real star of the film as Whale combines script, acting, mood, and setting amidst the background of ground-breaking special effects that are still impressive to this day. Whale laces his special humour throughout, and this film has no shortage of dark comedic moments. The acting all around is very good with people like Henry Travers, Gloria Stuart, Una O’Connor and William Harrigan especially as a jealous doctor giving all the support they can to a formless Claude Rains. Rains’s voice is magnificent and one senses he was made to play the part that would make him famous. Look for Dwight Frye in a small role. A wonderful film experience!