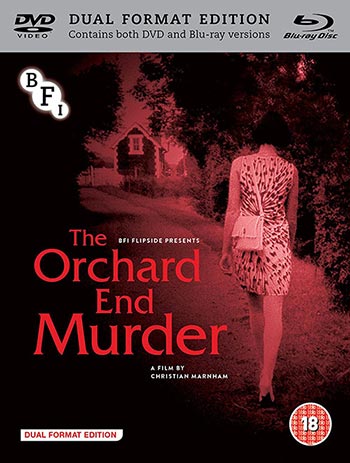 Set in an idyllic Kent village one balmy summer during the 1960s, this obscure British oddity is a macabre tale of murder and mischief.

A young woman from the suburbs (Tracy Hyde), bored by a countryside tryst, wanders off to explore her surroundings. When she meets a gnome-like stationmaster and his towering, half-witted railway-worker friend (played by Casualty’s Clive Mantle), an initially strange encounter turns sinister among the trees of a nearby orchard.

Written and directed by Christian Marnham and shot by Pete Walker’s regular cameraman Peter Jessop, The Orchard End Murder is a violent, darkly humorous thriller, unseen since it originally shocked UK cinema audiences as the supporting feature to Gary Sherman’s Dead and Buried.