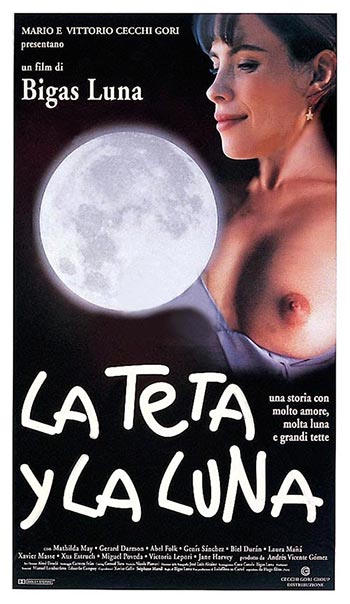 This Spanish/French film presents a loving ode to a woman’s breasts and the three men who love them. The fairy tale is told from the viewpoint of 9-year old Tete, who jealous of his new brother’s access to his mother’s breasts, implores the moon to give him a nurturing breast of his own. French cabaret performers Estrellita, the Queen of Stuttgart, and her jealous husband Maurice, come to town with their surprisingly vulgar act. When Tete sees Estrellita, he knows his wish has been granted. Trailer-park electrician Miquel is also very attracted to Estrellita’s charming chest and begins serenade her. Tete gets to sample her charms after he brings her a frog.

Probably Bigas Luna’s finest achievement for it achieves a delicate balance between sleaze, eroticism and surrealism. The delicious Mathilda May, who spent most of Tobe Hooper’s “Lifeforce” in the buff, is the object of young Biel Duran’s pre-teen lust. He can’t get May’s breasts out of his mind and wants so badly to suckle them and suckle the breasts of his own mother, too. His pursuit of May IS the film. As in Luna works such as “Lulu” and “Jamon! Jamon!”, the director brings a slightly warped sexual sensibility to his strange but beautiful tale. The usual suspects will be offended, but those with open minds will enjoy this frothy erotic poem to the female breast. José Luis Alcaine’s images are gorgeous and Nicola Piovani’s score is sweet and rich. A gorgeous cinematic confection with a delightfully anarchic sensibility that the Spanish do so naturally.