Who Cares: Anatomy of a Delivery Boy (1971) Claude Faraldo 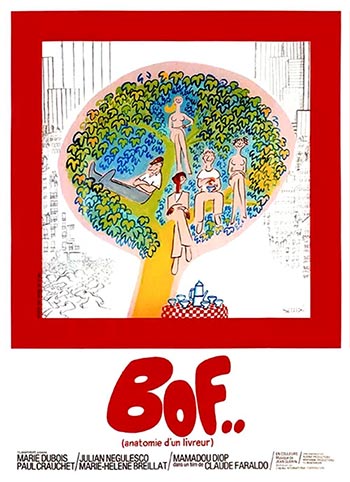 Experiencing something of a mid-life crisis after his beloved son marries and moves out, a factory worker makes some drastic changes in his life, moves in with the boy and his wife, and sets them all on the path to a communal lifestyle.

Bof ! Anatomie d’un Livreur, just like Themroc is an unusual movie by Claude Faraldo. It tells the story of a delivery man, his wife, his father and a couple of friends who decide to live as a commune, outside of the usual rules of society. That includes sharing everything. The whole thing made at the time for a shocking, taboo-breaking experience. In how many movies did you see a son pushing his beautiful young wife in the arms of his father ? Even in the late 60s/early 70s ?

The part of the father is one the best that great character actor Paul Crauchet ever had, and the wife is probably the sexiest part that fine actress Marie Dubois ever played. The rest of the cast is less stellar but competent, including Marie-Hélène Breillat who happens to be director Catherine Breillat’s sister.