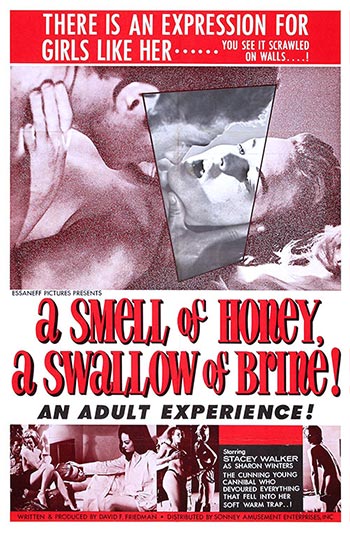 She’s a sadistic little sex kitten gleefully destroying men with A Smell of Honey, A Swallow of Brine! She’s Sharon Winters – played by the delectable Stacey Walker of The Notorious Daughter of Fanny Hill – the Ultimate Tease who gets her kicks by seducing guys, then calling for the cops: “What do you think I am? Some two-dollar hustler?” She sends one young man to jail, forces another to skip town and drives one poor slob so crazy that he runs maniacally through the streets before attacking the first woman he sees! But the tables are turned when Sharon zeroes in on a thug who’s even sicker than she…

Written and produced by the legendary David F. Friedman, this gritty, gutsy, outrageously un-PC sinema classic is a truly twisted gem from the Golden Age of Sexploitation!