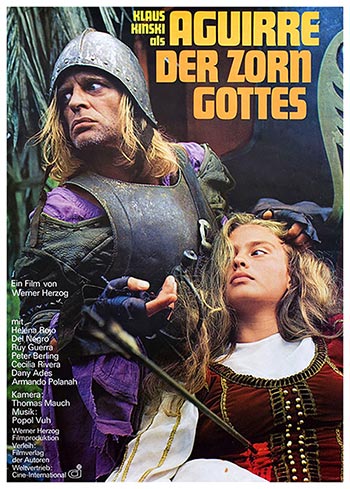 A few decades after the destruction of the Inca empire, a Spanish expedition leaves the mountains of Peru and goes down the Amazon river in search of gold and wealth. Soon, they come across great difficulties and Don Aguirres, a ruthless man who cares only about riches, becomes their leader. But will his quest lead them to “the golden city”, or to certain destruction?

Stunning, dreamlike film documents (in a somewhat documentary style), the story of Don Lope de Aguirre (Klaus Kinski), who leads a group of Spanish conquistadors into the depths of the jungle in search for El Dorado, the mythical city of gold. Beautiful cinematography and locations place the viewer into the heart of the jungle, where they witness firsthand Aguirre’s descent into madness. Continually interesting and exciting, it features some of the greatest images ever committed to film, most notably the opening and closing shots of the movie.