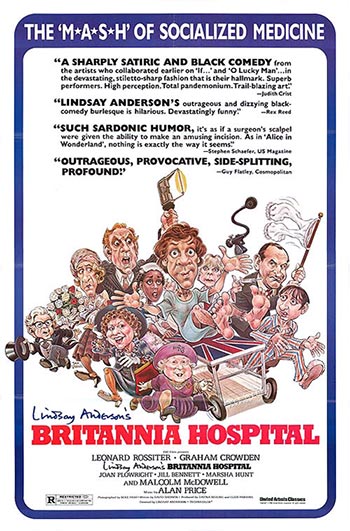 Mick Travis is a reporter who is about to shoot a documentary on Britannia Hospital, an institution which mirrors the downsides of British Society. It’s the day when Her Royal Highness is to visit the hospital to inaugurate a new wing, where advanced (and sinister) scientific experiments led by Prof. Millar will take place. Everybody in the hospital, from the cooks who refuse to cook, to the painters who couldn’t care less to get their job done, to an African cannibalistic dictator (a la Amin Dada) whom demonstrators want expelled from the hospital and tried, will contribute to making HRH’s visit (and Mick Travis’s life) a true nightmare.