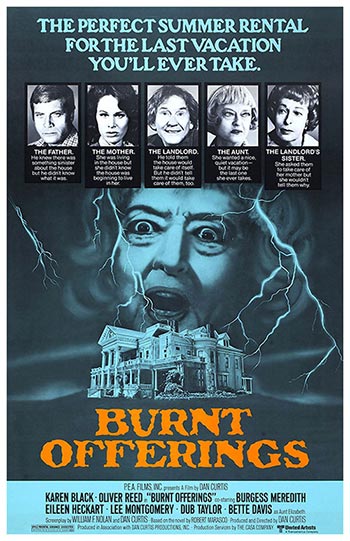 Haunted house chiller from Dan Curtis has Oliver Reed and Karen Black as summer caretakers moving into gothic house with their young son. The catch? The house rejuvenates a part of itself with each death that occurs on its premises.

This is a very entertaining movie that could have been one of those plodding and boring supernatural themed films that were common in the 70s. But director Dan Curtis (The Night Stalker, The Night Strangler) allows the story to unfold without allowing it to go sit too long. This allows the movie to build some tension and dread as we watch the characters slowly change and wear down. Of course having an excellent cast only helps to keep the movie interesting and easy to watch. The parents are played by Oliver Reed and Karen Black, both of whom do a wonderful job. Hell, Burgess Meredith even shows up in a minor role, and despite his lack of screen time makes a memorable impression.