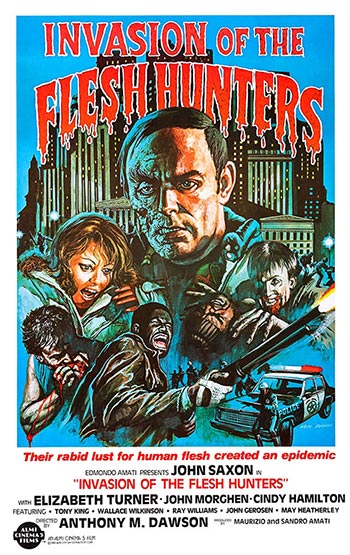 It starts off in Vietnam where John Saxon gets bitten by P.O.W. John Morghen who has been infected with some sort of cannibal virus. A few decades later in Atlanta, Georgia, Saxon wakes up from a nightmare flashback of what actually happened back in ‘Nam. Saxon then receives a call from Morghen asking him if he wants to go out for a drink but Saxon refuses remembering the incident in ‘Nam. Morghen has turned into a cannibal and is soon on the run after biting into a woman’s neck. He barricades himself in a department store and shoots some folks with a shotgun. The cannibal virus spreads and soon Saxon joins veterans Morghen and Tony King along with some others to wreak some havoc.

A cannibal-movie that actually tries and succeeds to be different. This movie transcends the cannibal genre and becomes something else. You’ll have to get past the silly & inept Vietnam opening-scene, but then this movie turns into an urban tale of virus-outbreak. A cannibal-virus, that is. There’s some violence, there’s some drama, there’s some nudity, there’s some very nice gore and there are four cannibal-fugitives on the run. Awesome mixture that works! Add to that a satisfying ending, and we’ve got a hit!