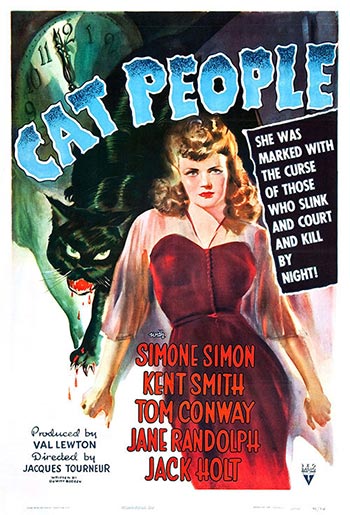 Irena Dubrovna, a beautiful and mysterious Serbian-born fashion artist living in New York City, falls in love with and marries average-Joe American Oliver Reed. Their marriage suffers though, as Irena believes that she suffers from an ancient curse- whenever emotionally aroused, she will turn into a panther and kill. Oliver thinks that is absurd and childish, so he sends her to psychiatrist Dr. Judd to cure her. Easier said than done…

‘Cat People’ was the first collaboration between director Jacques Tourneur (‘Curse Of The Demon’) and producer Val Lewton, and is still one of their greatest achievements, and one of the most influential horror movies ever made. It’s arguably the best horror movie made between the Universal classics of the 1930s and the beginning of Hammer studios in the 1950s. So many subsequent film makers from Hitchcock on down have been influenced by this movie and yet it rarely gets the respect it deserves. ‘Cat People’ pretends to be a monster movie but is really something more complex, and relies on atmosphere and suspense rather than explicit shocks or gore (there is virtually none of the latter). Fans of Hitchcock and film noir will probably appreciate it more than hardcore gorehounds. Simone Simon is very well cast as the mysterious and troubled Irena and the rest of the cast range from adequate to very good. The acting is probably one of the weakest links in the film but not enough to spoil your enjoyment. ‘Cat People’ is a horror classic and is highly recommended to anyone interested in the genre.