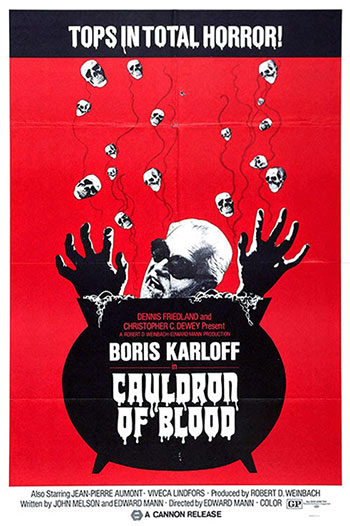 A blind sculptor works on his magnum opus unaware that the skeletons he has been using for armatures are the remains of the victims of his evil wife and that he is the next target.

Producer Robert D Weinbach originally wanted Claude Rains for the role of Badulescu, but due to Rains’s illness, he was replaced by Karloff. Originally titled Blind Man’s Bluff, the film was shot in and around Madrid. Filming began in Februrary 1967 and lasted almost three months. Karloff was in ill health himself, but never wanted to give up acting and worked in his craft until he died in 1968. Karloff worked hard as a laborer and even a truck driver between acting roles when he was first starting out in Canada and knew what it was to miss a few meals. Karloff made this film a classic and it will be viewed and talked about from generation to generation.