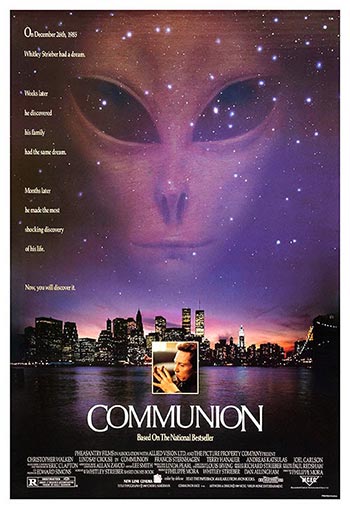 Whitley Strieber goes with his family and some friends to his holiday home in the forest. They experience some weird occurances, are they UFO activity? Whitley is abducted and then faces a horrible dilema; was I abducted or am I going mad? He sees a psychiatrist who tries to use hypnotic regression to discover the truth.

This movie remains one of Walken’s best performances to date. Forget “Deer Hunter”, he is one of two things that carry this film. It’s him and the aliens, and that’s it, but what a great film, anyway. The X-Files, though a good show, never quite reaches the level of freakiness that “Communion” has in moments like those in which Walken confronts the aliens. At one point, he states upon waking up to a suspected abduction that, “I don’t want to think about that so, I go back to bed.” There are so many classic lines of dialogue between Walken and the aliens that the movie reaches a point where it seems almost like a bizarre, personal delusion–portrait of a madman rather than alien abductions.