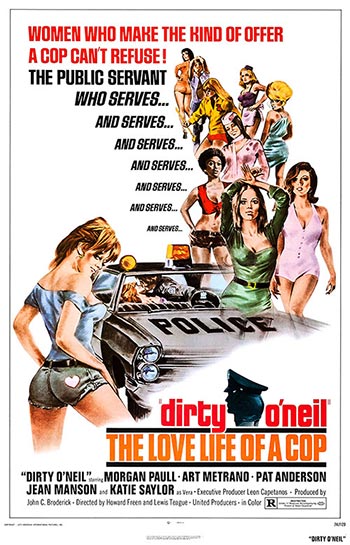 Rookie cop Jimmy O’Neil has been on this small town police force for roughly three months, and he’s still a little wet behind the ears. Aside from a few speeders, a bar fight or two, and a suicidal man in a gorilla suit (seriously!), he hasn’t seen much in the way of action. Meaning that he has a lot of free time on his hands. Free time which he fills by bedding down with practically every pretty young thing in a ten mile radius.

O’Neil’s partner, Lassiter, wishes that a little excitement would come to the small burg, just a little something to liven things up and see if O’Neil has really got what it takes. He may regret making that wish, because it’s not long before a trio of traveling thugs arrives in town, looking to rape and plunder. When they target Ruby, everyone’s favorite diner waitress, O’Neil decides to go renegade and make those bastards pay.

Directed by Leon Capetanos (after Lewis Teague was fired), who went on to write FLETCH LIVES (1989), this super-rare melding of the 70s Cop Drama and Sex Comedy genres is a pretty hit and miss affair, but still is well worth checking out. The cast includes Raymond O’Keefe, and January 1971 Playboy Playmate Liv Lindeland.