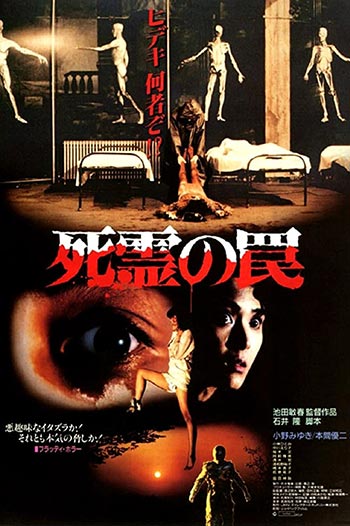 Nami hosts a late night home video program. She receives a tape which appears to be a real snuff film. She and her crew investigate the location where she meets a man looking for his brother who warns her to stay away. As she gets closer to the truth, she and her friends are subjected to a brutal nightmare.

Toshiharu Ikeda’s “Evil Dead Trap” was really popular in Japan, spawning at least two sequels. Nami (Miyuki Ono), a late night TV show host, receives a strange tape. It shows the brutal murder of a young Japanese woman. Nami launches her own investigation, taking four of her crew to an abandoned Army base. However somebody, or possibly something is waiting for them…”Evil Dead Trap” is obviously influenced by the works of Dario Argento, Lucio Fulci, Sam Raimi and David Cronenberg. It has even Goblinesque soundtrack which reminds me Argento’s “Suspiria”. Still the film has some wonderful surprises-it’s atmospheric and very gory. The death scenes are pretty graphic and gruesome, so gorehounds won’t be disappointed.