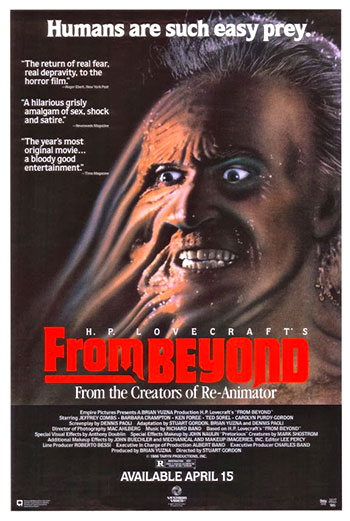 A group of scientists have developed the Resonator, a machine which allows whoever is within range to see beyond normal perceptible reality. But when the experiment succeeds, they are immediately attacked by terrible life forms. Based on a story by H. P. Lovecraft.

This is done by the same crew that gave us ReAnimator and while it follows in the same tradition of camp, cheese, and corn, “From Beyond” offers something more. There is sexier sex from Barbara Crampton, fresh from the Young and the Restless daytime soap. It is hard to decide if it is her Femme Fatal or her Black Leather Dominatrix that is the sexier. She does them both so well. Jeffery Combs gets a true starring role in this time out and offers much more depth to his reluctant hero character. His mentor/adversary Dr. Pretorius, played by Ted Sorel, is the essence of perverse genius.

The special effects are also more intense and a step beyond anything else you’re likely to have seen. Especially the battles between Pretorius and Combs’ character, Crawford Tillinghast. With all the tongue in cheek humor, the campy sets and costumes, and the cheesy dialogue there still lies a truly spine tingling and disturbing storyline beneath it all. This movie could have easily been just another campy horror film but the terror of perversion makes it so much more.

This film disturbs and entertains, excites and amuses a unique vision unlike anything else.