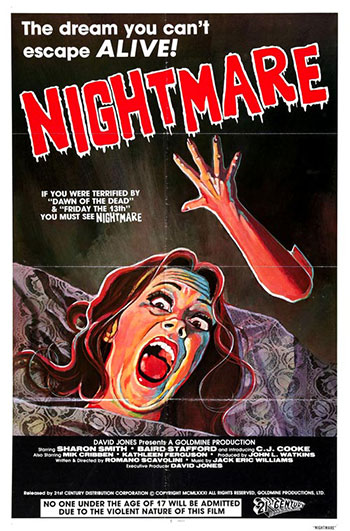 A mental-patient, who is troubled with horrible nightmares, has escaped from his hospital. Now on the streets he can’t help killing innocent people. But there is one family he is more than interested in and when he tries to kill them, he finds that it’s not that easy.

NIGHTMARE IN A DAMAGED BRAIN is a rare treat of early 80’s American low-budget horror, as it has both a decent story/plot and a considerable amount of gore for the era…

George is a schizophrenic psychopath who escapes from the care of his physician. The “wonder drugs” that George takes to combat his spells of delirium and psychoses don’t work too well, and soon he’s on the loose and up to no-good. We find that George’s problems are deep rooted within his family and have to do with an experience he witnessed involving his father and some random hooker-ish chick when George was a boy. George’s psychiatrist is on the chase to track him down and all is revealed in the “shocking” conclusion.

NIGHTMARE IN A DAMAGED BRAIN is a very decent horror film. A little dated by today’s standards but still has more gore and cool kill scenes than you average current U.S. theatrical release. An over-looked film that could use some more recognition. If you dig slashers/psychological horror then you’ll probably feel this one.