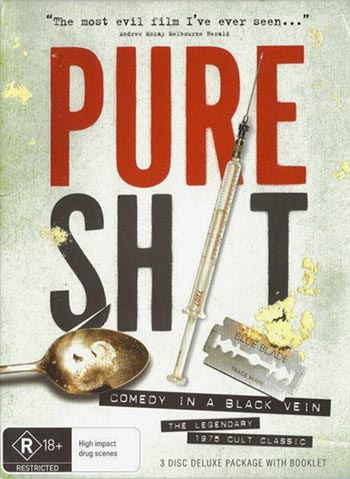 Four young heroin addicts scour the streets of Melbourne in search of some good-quality narcotics – or as they call it, ’pure shit’. In the space of 48 hours, a friend dies of an overdose, they are ripped off by criminals and arrested and assaulted by police. They bungle a break-in, get chased by hooligans and one is sent to a methadone clinic. The search for drugs veers between farce and tragedy, but it never stops.

Excellent account of a group of people drawn together in the never ending chase for their next hit. It draws together characters who have just given up, just starting on a path to destruction, people who have already begun a path to crime. Nobody ever considers pulling out they just keep going. The journey includes overdoses, burglary, speed freaks and the blockaid methadone program that became popular in the 70s. The characters seem real and the low quality of the acting only makes them more real. Guys who have to have their hits before the girls, no sex relationships and other reality bites add to the quality of the script. An Excellent film that shows Australians can produce worthwhile films in the drug/road movie genre.