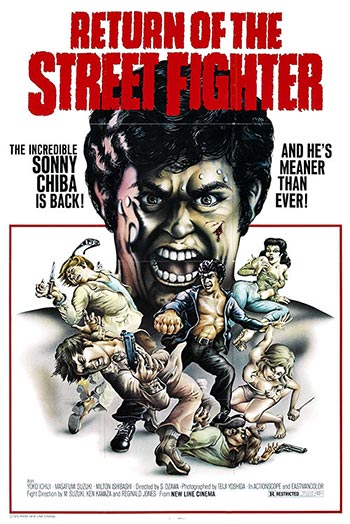 After attracting notoriety at movie theaters around the world (along with plenty of profits) with the brutal kung-fu hit The Street Fighter, the character of Terry Tsugury (Chiba) was quickly revived for Return of the Street Fighter.

This time, Tsugury is hired by Japanese mobster Otaguru (Tanaka) to kill a pair of captured employees so they cannot inform on his activities (he has teamed with the American mafia under the guise of building a martial arts center). When Otaguru orders Tsugury to kill his old friend Masoaka (Suzuki), Tsugury refuses and is forced to go on the run with. To make matters worse, Junjo (Ishibashi), Tsugury’s old nemesis, has reappeared and set his sights on revenge. Tsugury takes a vicious beating from Junjo, but recovers in time to punch, kick, and gouge his way through everyone who has crossed him during the finale.

Although critics considered it to be little more than a hyper-violent cartoon, Return of the Street Fighter found favor with action fans who loved the first installment.