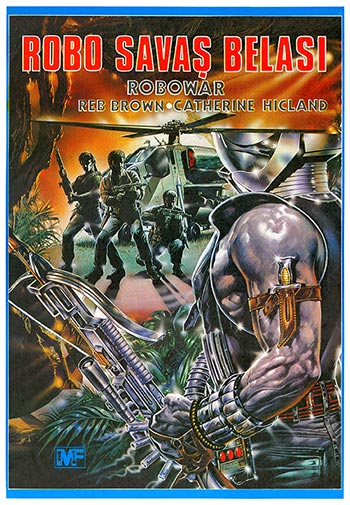 A clone/mix of PREDATOR and ROBOCOP gone nuts jungle flick with an internatioanl cast, exotic locale and good electronic music.

Much has been made that this is just an Italian knockoff of Predator (1987) and Robocop (1987) (but especially Predator)…that’s all well and good, but, that aside, is this movie worth seeing? The answer is definitely yes! For a movie with almost no plot, it’s surprisingly fast-paced, and rather than have a lot of dialogue, it’s mainly yelling and shooting machine guns. However, there are some gems, such as “You walk like a ruptured duck!”. Maybe something was lost in translation, but we’re sure glad it was. There are other silly one-liners, but this was our favorite.

Fan-favorite Reb Brown is out in force here – looking especially ripped in his child-size half-shirt, he gets to command his team with his trademark screams. But let’s not forget about the cool nicknames of the people he’s stranded in the jungle with – “Blood”, “The Hunter” and “Papa Doc”. Naturally, they were picked for this mission because they’re “The Best”. As for the robot, we get some pixelated “robo-vision”, and it seems like a guy in a motorcycle outfit. But he also has a confused, scrambled, “robo-voice” as well, which seems heavily influenced by Buck Rogers’ Twiki and his famous “bidi bidi bidi”. It doesn’t exactly inspire terror, but hey, who’s to say how we’d feel if we were in that situation? As if this wasn’t awesome enough, the robot can shoot lasers. Of course, they’re of the “pew pew” variety! That alone raises the coolness quotient of this movie. And because this never received a VHS release in America (maybe they didn’t want to roll the dice with rights issues?), we were sadly deprived of this minor gem in the 80’s and 90’s. Honestly, it’s still pretty hard to find, presumably having been released largely in Japan and Italy, and we thank Sutekh over at Explosive Action for hooking us up with a copy.

If you ever wished Predator was an Italian-made Exploding Hut movie shot in the Philippines, and had a robot instead of a “Predator”, this is surely the movie for you. Featuring a great synth score by Al Festa, Robowar is shameless…ly entertaining fun.