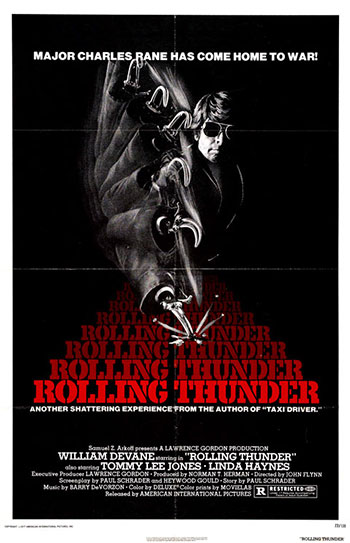 Major Charles Rane comes back from the war and is given a number of gifts from his hometown because he is a war hero. Some greedy thugs decide that they want to steal a number of silver dollars from him. In the process they also manage to kill his wife and son and destroy his hand. The Major wants revenge so he enlists the help of his war buddy Johnny to meet the thugs in a final showdown.

Good writing, acting and directing place this violent revenge melodrama a cut or two above most films of its genre. William Devane gives a strong, stoic performance as Major Charles Rane, an ex-Vietnam POW who returns home to his wife and son, only to have his peace-time dreams shattered by a gang of vicious, menacing home-invading hoods who murder his family and leave him permanently maimed. After rehabilitation, he goes gunning for the people responsible for the crime. Tommy Lee Jones is very good as his fellow Army buddy who willingly joins him on the vengeance trail. The film is enhanced by adding some psychological insights into Devane’s character….we get a revealing peek at how his wartime experiences have changed him and what makes him tick. The film is tense and extremely violent in spots, but the violence is not gratuitous. Paul Schrader, who wrote the classic “Taxi Driver” also wrote the original story here…and it shows. This one’s worth seeking out.