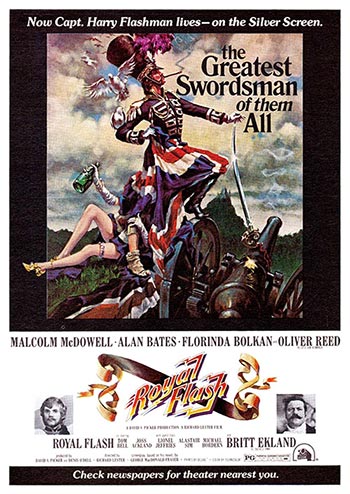 Captain Harry Flashman of the British army is a cad, a coward, and a lecher who always seems to come off inadvertently heroic. While romancing renowned courtesan Lola Montes, Harry is recruited against his will by Otto von Bismarck to substitute for a lookalike Prussian prince ostensibly in order to help Bismarck enlarge his hold over German duchies. But Bismarck has something more sinister in mind for both Harry and the prince.

Who else but that hate-to-love Malcolm McDowell could possibly do justice to one of literature’s great scoundrels, Harry Flashman? In this George MacDonald Fraser spin-off of Thomas Hughes’ classic Tom Brown’s School Days, we are treated to some hilarious apocryphal tales involving such larger-than-life nineteenth-century figures as Otto von Bismarck and Lola Montez.

This ripely visual Richard Lester production is sometimes a bit over the top, with gratuitous slapstick and audible guffaws and grunts. Nevertheless, on balance, a delightful romp, and a chance to see the wonderful Alastair Sim in one of his final appearances.