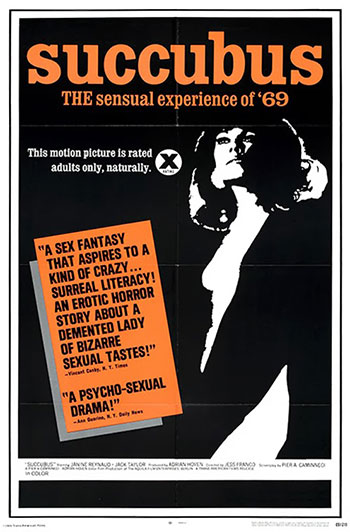 Janine Reynaud stars as a nightclub stripper who free-floats through a spectral 60’s landscape littered with dream-figures, dancing midgets and bizarre S&M games.

Franco proves, once again, that he is the prince of surreal & erotic cinema. True, much of his work can be viewed as entertaining sleaze but with Succubus (Necronomicon) he shows what he is truly capable of when he lets his warped creativity run riot and gives us a film that is both hypnotic and enigmatic whilst still maintaining the delirious eroticism intrinsic in his work. Jerry Van Rooyen’s splendid score pulsates as the viewer is thrown from one bizarre scenario to another as we follow the trials of a striptease artist (Reynaud) who may be schizophrenic, or may indeed (as one mysterious character states) be a devil, attempt to come to terms with the world she inhabits. A beautiful and enigmatic piece of cinema highly recommended to anybody with even a passing interest in alternative cinema.