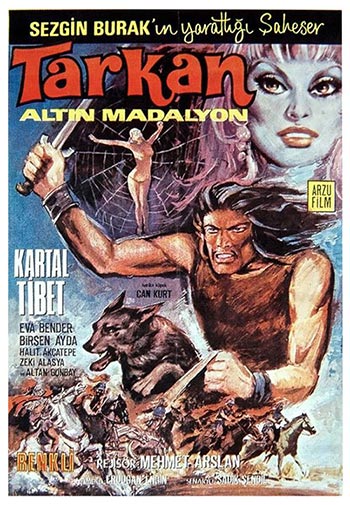 The story of Tarkan and his friends efforts to rescue Atilla’s kidnapped son. Jaw-dropping Turkish fantasy/action film that overflows with one crazy scene after another. Including a nude horseback riding vampiress snaring a woman in a giant spiderweb, mad slashing and hacking swordfights, acrobats tossing a young boy around like he’s a hot potato and our hero, Tarkan, (Kartal Tibet) fighting a gold swordsman in a room full of spikes. Finally, a nun along with a stripper are tied to crosses and stabbed in the stomach, allowing their blood to trickle down troughs to revive a busty undead babe in a coffin. Also stars Eva Bender and Altan Günbay.