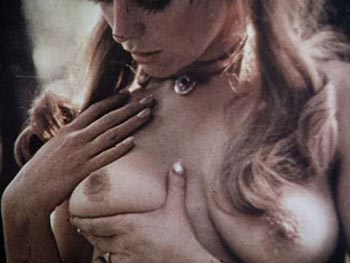 The rarely seen The Anatomy of a Pin-up is an energetic and bizarre documentary about ‘Penthouse Pets’ and the nude modelling industry in Britain during the early 70’s. Featuring interviews with ‘ordinary’ members of the public in the street (some of which, mostly the men, are highly peculiar indeed) and with notable figures of the time, such as Penthouse owner Bob Guccione, ‘swinging’ photographer Amnon Bar-Tur, model Katie Brooks and the outlandish novelist Barbara Cartland (!), this astonishing documentary originally played as a second feature with Hitchcock’s last great picture, Frenzy. That might rank as one of the ultimate 1970’s movie double bills of the entire wayward decade.

As an amusing time capsule of the moods and mores prevalent in Britain concerning sexuality, pornography and fashion in the early 1970’s, Anatomy of a Pin-Up is invaluable. Its director, David Cohen, would eventually direct very serious documentaries about hijacking, Broadmoor and heroin withdrawal.