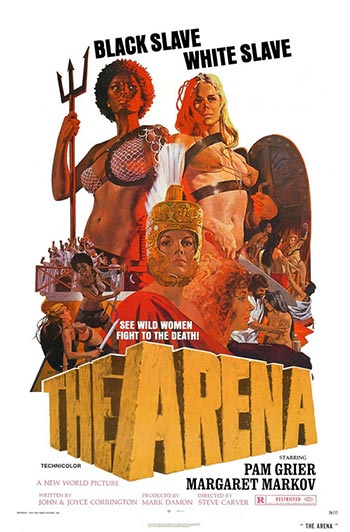 Two thousand years ago, the people of Rome are so blasée, so used to violence, that entertaining them becomes a political problem. Someone suggests, after a hectic girl fight in a kitchen between a Nubian and a Viking slave, as a joke, that they should fight in the arena, instead of male gladiators. The idea is approved, though – and a female “Spartacus” theme follows.

Steve Carver’s “The Arena” aka. “Naked Warriors” of 1974 is a highly entertaining piece of 70s exploitation that should not be missed by a B-movie fan. Produced by the almighty Roger Corman, co-directed by the king of exploitation himself, Joe D’Amato, and starring the sexiest duo of 70s cult heroines, the wonderful Pam Grier and Margaret Markov, this is pure Grindhouse cinema for lovers, and should not leave anybody bored.