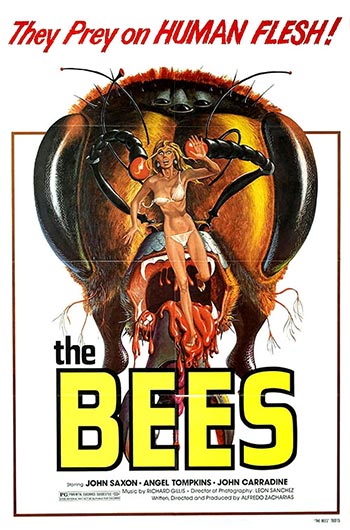 Corporate smuggling of South American killer bees into the United States results in huge swarms terrorizing the northern hemisphere. A small team of scientists work desperately to destroy the threat, but the bees soon mutate into a super-intelligent species that threatens the world.

Wow. This must be the funniest bad film of modern times, a real 1970s counterpart of Ed Wood’s earlier classics. It features some awful acting and fluffed lines by the unforgettable cast featuring those B-movie veterans John Saxon and John (Star of 97 Mexican cheapies) Carradine, and glamorous starlet Angel Tompkins who apparently failed her “Charlie’s Angels” audition and so ended up in this. Fifth billed is super-star Alicia Encinas, who has about four seconds of screen time and speaks one line of dialogue.

Watch out for the most obvious stock-footage ever seen (how many thousands of times have we seen that plane crashing film?—and how about those terrified-crowd scenes that were obviously filmed sometime in the 1960s), obvious dummies that drift in the breeze and are supposedly impersonating characters jumping from tall buildings, some outrageously bad sequences depicting ordinary citizens being attacked by rampaging bees that are so over-acted they actually do seem like a send-up, and watch out for poor arthritic John Carradine attempting to unbutton his jacket but on realising he wont be able to do it, pretends he was merely sweeping a bit of lint from his suit!