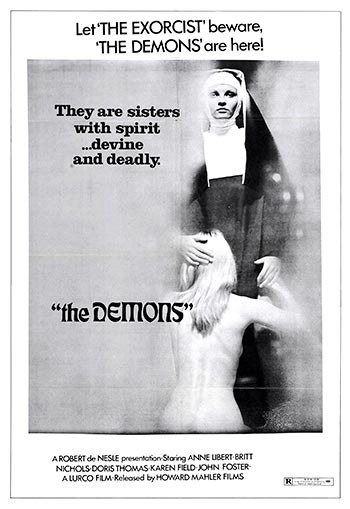 A group of nun’s become possessed by demons and are then tortured in a dungeon of horrors during the inquisition.

The film, clearly modelled on Ken Russell’s The Devils (1971), opens with the torture and burning of a witch; as the old crone goes up in flames she places a curse on the people responsible for her death—Lord Justice Jeffries (Cihangir Gaffari), Lady De Winter (Karin Field) and Thomas Renfield (Alberto Dalbés). Years later, beautiful nun Kathleen (Anne Libert) begins to experience sinful dreams and, along with her equally tasty sister Margaret (Britt Nichols), is suspected of being a witch, bringing them to the attention of Lady de Winter and her wicked pals. After much cruelty, torture, and sex, it transpires that sisters Kathleen and Margaret are the dead witch’s daughters, and that they are to be her instruments of vengeance.

With a plot that goes in circles, Franco’s trademark (ie. clumsy) directorial style (erratic zooms, roving camera etc), and loads of crap acting, Les Demons isn’t exactly what you would call a Euro horror classic, but with Libert and Nichols regularly disrobing to indulge in all manner of deviancy (self gratification, lesbianism, sex with the devil—that sort of thing), plus a hefty dose of sadism and violence, this trashy piece of nunsploitation should still hold your attention to the end. A wonderfully incongruent soundtrack—including a funky bass guitar that kicks in whenever the women get saucy—only adds to the charm.