The Discreet Charm of the Bourgeoisie (1972) Luis Bunuel 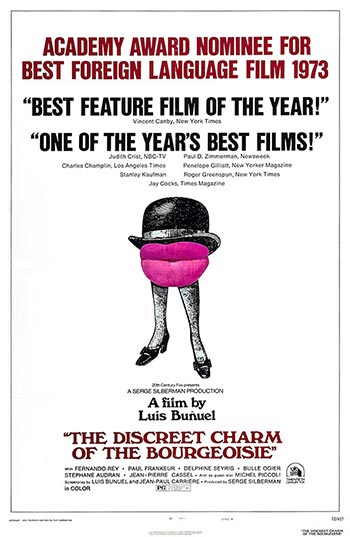 In typical Luis Buñuel fashion, The Discreet Charm of the Bourgeoisie surrealistically skewers the conventions of society. Buñuel applies his surrealist touch to a mundane event: a dinner party that may never come to pass.

A group of well-to-do friends attempt to gather for a social evening, but are thwarted at every turn. The initial problem seems to be a simple scheduling mistake, but the obstacles become more and more bizarre. At one point, the guests are interrupted at the table by an army on maneuvers. Later they learn that they are merely characters in a stage play and so cannot have dinner together. These misadventures are combined with symbolic dreams of the various characters, some of which also involve interrupted dinners.

Wicked social satire and one of Buñuel’s funniest films. Winner of the Academy Award for “Best Foreign Film” in 1972.

The Discreet Charm of the Bourgeoisie (1972)