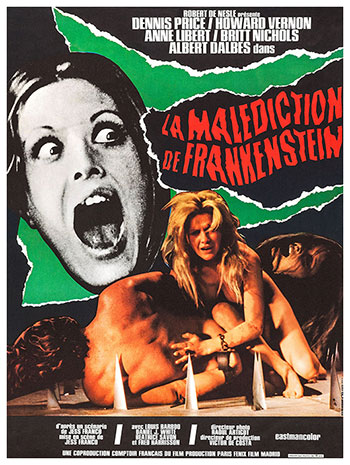 Dr. Frankenstein and his assistant Morpho are killed just as they bring their creation to life. The monster is taken by Cagliostro and he now controls the monster and plans to have it mate and create the perfect master race.

Daniel White’s atonal, experimental score skillfully enhances the film’s nightmarish languor, and the roles, particularly Anne Libert’s blind cannibalistic Bird Woman, and Howard Vernon’s strangely sexy Cagliostro, are performed with aplomb and conviction. You won’t soon forget the scenes of white-shrouded undead gliding through a mist-laden forest, the strange, red-lit shots of Cagliostro’s acolytes blithely staring at cruel tableaux orchestrated for their perverse amusement, or a shrieking, silver-skinned Frankenstein’s monster relentlessly whipping a man and a woman tied together over a bed of spikes.