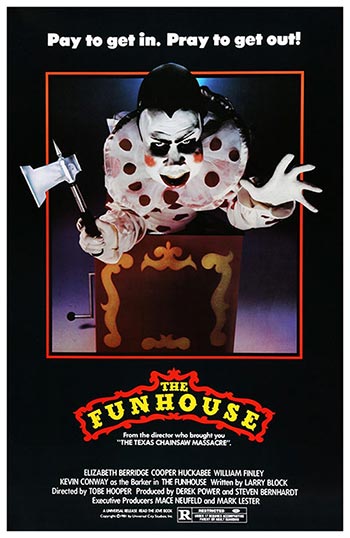 Two young couples on a double date go to a mysterious carnival. As a prank they decide to spend the night in the funhouse. When they witness a brutal murder, they suddenly find themselves in horrific danger.

“The Funhouse” is based on a screenplay by Larry Block and Dean Koontz’s “The Funhouse” novel was written and released as a tie-in with Tobe Hooper’s movie,under the pseudonym of Owen West. The story moves around a group of teenagers who decide to break into a carnival funhouse and spend the night there for a bit of fun. Soon they’re stalked by a ghastly freak from the carnival. “The Funhouse” is no “Texas Chain Saw Massacre”(1974) or even “Eaten Alive”(1976), but Tobe Hooper really creates some thrills and a good deal of suspense. The film probably ended up on a video nasties list by mistake,as it may have been confused with “Last House on Dead End Street”(1977) which was also known as “The Fun House”. So if you like horror genre-check out this quite sleazy and occasionally very scary film.