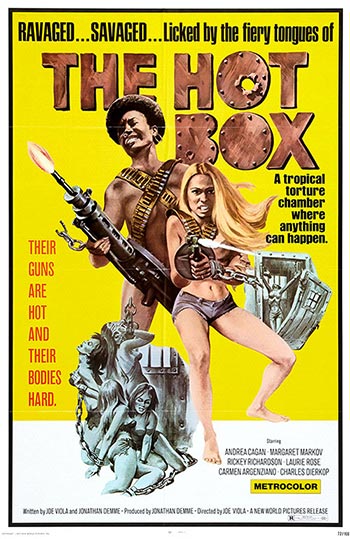 Hot action and lust in the steamy tropical jungle, as heroines break out of a women’s prison and start a local revolution.

Hellcats (aka The Hot Box, 1972) continues the jungle sleaze tradition, co-written by the future director of Silence Of The Lambs, Jonathan Demme. Director Joe Viola and Demme had already worked for Corman on the low-budget biker flick Angels Hard As They Come. They now headed to the Philippines to film the story of four deliberately vacant nurses (including its token black actress) kidnapped by the ‘Peoples Army’, a ragtag bundle of greasy drunks and lechers, and forced to spend most of their incarceration topless. Despite their hysterical over-acting, they slowly become politicized gun-toting radicals, once they are shown parallels between the corrupt local government and the Nixon administration. It’s a real pre-Watergate oddity, doling out its heartwarming liberal sentiments while blatantly exploiting its female flesh.