The Hound of the Baskervilles (1959) Terence Fisher 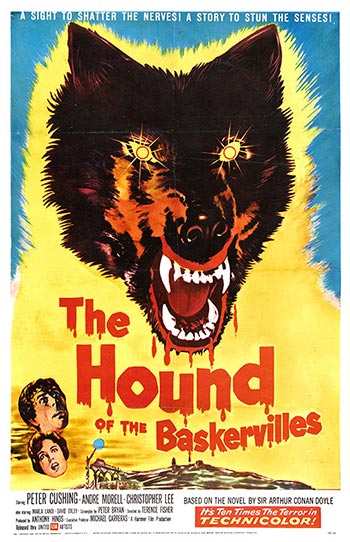 Returning to his family’s manor house on the lonely moors after his father dies under mysterious circumstances, Sir Henry Baskerville is confronted with the mystery of the supernatural hound that supposedly takes revenge upon the Baskerville family. The famous detective Sherlock Holmes and his assistant Dr. Watson are brought in to investigate.

Although this version of the story differs from the original novel, there is much to recommend it for. The film is well paced and atmospheric but it’s greatest strength is the excellent cast, particularly the three leads. It’s nice to see Christopher Lee playing the romantic role as a change to his usual monsters and Peter Cushing is brilliant as Holmes, his performance being the definitive as he makes the character believable and interesting. This film also features the best ever casting of Dr Watson. Andre Morell moves away from the bumbling fool of other Holmes films and makes Watson intelligent, capable and even dashing. Morell’s charismatic performance is all the more welcome as ‘Hounds’ is the story which puts Watson centre stage for most of the plot. It’s a shame he never played the part again as he and Cushing make the perfect Holmes and Watson. If only Hammer had made a series of Holmes films.