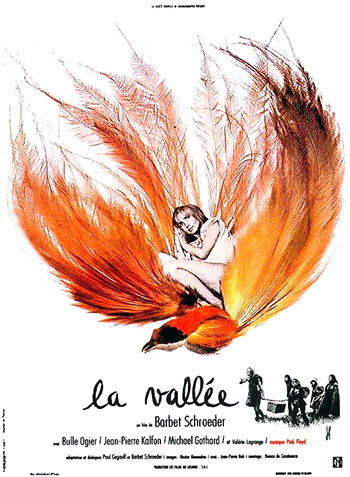 Viviane, a French Consul’s wife, is in New Guinea to find exotic feathers for export to Paris. She encounters four European travelers who are en route to “La Vallée”: The Valley, high in the Guinean mountains, is shown on maps as ‘Obscured by Clouds’ and is beyond their previous experiences. Viviane joins their trek to find rare feathers and soon becomes entwined in their journey. Their extended stay with the Mapuga tribe brings a denouement between western and indigenous values before their final quest toward the ‘Valley of the Gods’.

While the film is likely most famous for using Pink Floyd for the soundtrack (Obscured by Clouds), this French film (w/ English subtitles) is quite thought provoking if you take the time to understand what the director is trying to say to the audience. Plenty of Utopian idealism in the film, but it is balanced in the end by some interesting philosophical discussions.