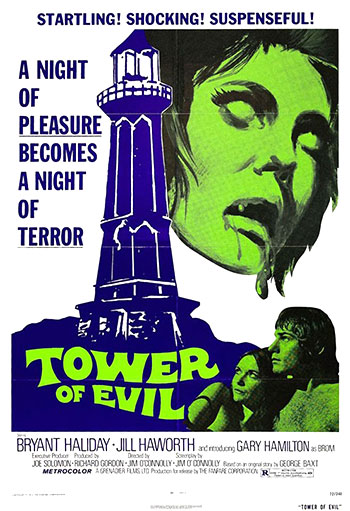 This moody British horror film was made several years before the “stalk ‘n’ slash” genre kicked off, yet this atmospheric chiller possesses a number of elements that would later become popular in the modern horror genre. At the same time it has the sense of an old Gothic horror film as well, with its gloomy atmosphere and dark setting. The story may be simple but it combines enough scenes of shocking violence, creeping suspense, and steamy sex to keep one engaged throughout. A little campy, yes, but it only adds more to the fun of this guilty pleasure.

The cast is adequate, highlighted by such veteran actors as Bryant Haliday, Jill Haworth, and Mark Edwards. In addition the gore effects are also well done and provide for some effectively chilling scenes.

For fans of the slasher genre or 70’s horror in general, Tower of Evil is an enjoyably eerie trip!