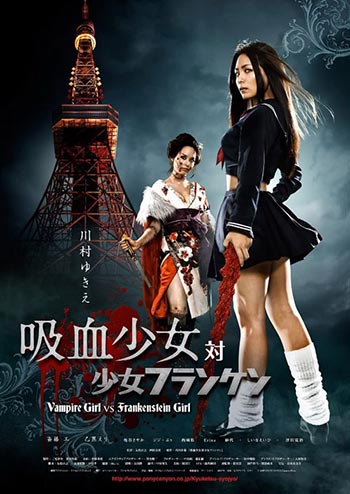 Transfer student Monami has a secret and a past that has caught up with Mizushima. Deceiving Mizushima into eating a token gift of chocolate, laced with her blood, he is then catapulted into Monami’s vampire world of blood, death and love. Jilted girlfriend Keiko has other ideas. With a sudden twist of fate, she is then transformed into the hideous and unforgiving Frankenstein Girl, and the battle for Mizushima’s heart begins.

This utterly insane culture extends into their film as well and one doesn’t have to look any further than Vampire Girl vs. Frankenstein Girl for an example of how depraved, grotesque and downright “weird” their movies can get. There are very few American-produced films that can match the sheer lunacy occurring within this “versus” circus freak show. Continuing in the tradition of previous hyper-violent, excessively-sexual Japanese horrors centered on attractive school-girls (popular films like The Machine Girl and Tokyo Gore Police), Vampire Girl vs. Frankenstein Girl throws a whole bunch of other peculiarities into the mix, including blackface, a kabuki mad scientist who air guitars using his victims spinal cords, an oversexed nurse with eyeballs sewn onto her nipples, a wrist-cutting competition, and copious amounts of blood equal in proportion to the accumulation of ten regular horror movies. If it isn’t one of the strangest films of all time, it certainly is of this year.