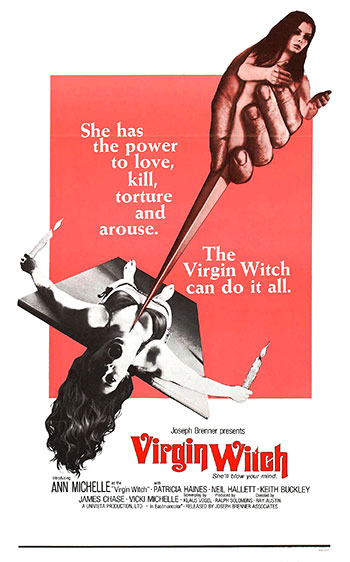 Christine gets her big chance at modelling when she applies at Sybil Waite’s agency. Together with Christine’s sister Betty they go to a castle for the weekend for a photo shoot. Sybil has lured Christine to the castle for more than modelling: she is recruiting a virgin for induction into a witch’s coven, led by the owner of the castle, Gerald. To their surprise, Christine is more than eager to join the coven, but begins her own secret battle for control.

This is a nice piece of time-wasting British exploitation cinema with the delectable Michelle sisters becoming embroiled in witchcraft and various sexy shenanigans in a picturesque country-house setting (‘filmed on location in Surrey, England’).

There’s a good score by Ted Dicks, including a rather seductive little tune called ‘You go your way’, performed by Helen Downing. And effective turns by old-hands like Neil Hallett (as the lecherous head of the coven) and Keith ‘Excalibur’ Buckley as the excitable investigative boyfriend. A highpoint is the scene-stealing performance by the lovely Patricia Haines (‘The Night Caller’) as the lesbian boss of a dodgy model agency. She, along with the sisters, disrobes in the hilarious ‘initiation ritual’ sequence.