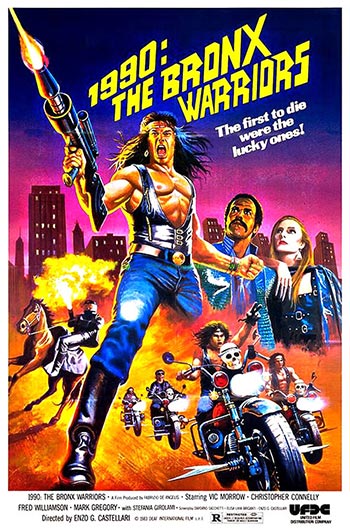 In a post-apocalyptic New York City, a policeman infiltrates the Bronx Warriors, which has become a battleground for several murderous street gangs. It’s the dead of night, and nobody at all is on the street. On the other side of the bridge, a Manhattan runaway, girl named Young Ann is attacked by a gang of street hockey players! These guys are on roller skates, dressed in fiberglass safety gear, and are wielding hockey sticks as weapons. They chase Young Ann into a dead end and surround her, but then they are themselves surrounded by a much tougher-looking gang who at least have the self-respect to ride motorcycles. In the middle of this chaos, gang leader Trash steps in to take care of her.