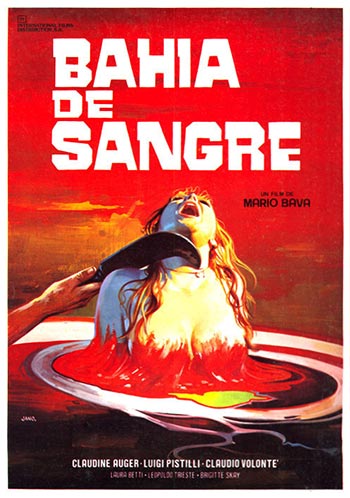 Audio 2 (only on dvdrip): Commentary by Tim Lucas,
author of Mario Bava: All the Colors of the Dark

An elderly heiress is killed by her husband who wants control of her fortunes. What ensues is an all-out murder spree as relatives and friends attempt to reduce the inheritance playing field, complicated by some teenagers who decide to camp out in a dilapidated building on the estate.

Mario Bava’s ultra-violent black comedy is mainly a satire on human greed – with one person killing another to gain the inheritance of a recently deceased woman. Opening with a double murder, the film has proved to be highly influential, with many contemporary slasher movies (among them various segments of the “Friday The 13th” series) replicating some of it’s key death sequences. While Carlo Rambaldi’s superbly well-done gore effects retain their shock value (and they assured that the film went onto the infamous “video nasties” list), it’s Bava’s gorgeous cinematography that steals the show and proves once again that the great Italian director did not just make horror movies – he made genuine art.

Rather than redub the film for an Italian or English speaking audience, Bava apparently shot all of the dialogue scenes in both languages.

A Bay of Blood (1971) Dvdrip with Audio Commentary